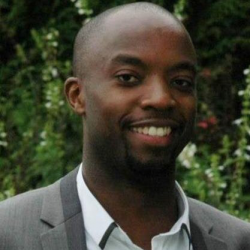 Dr. Ngaboyamahina is a Research Scientist with the Nanomaterials and Thin Films Lab at the Pratt School of Engineering's Department of Electrical and Computer Engineering. He is currently involved in the Reinvent The Toilet Challenge project funded by the Bill and Melinda Gates Foundation.

Dr. Ngaboyamahina completed his Ph.D. in Process Engineering and Advanced Technologies from Pierre and Marie Curie University in 2014. He received in parallel an MBA from the Collège des Ingénieurs in Paris (France).

Prior to joining the group, he worked with established French companies. With the Commercial Strategic Directorate of Eléctricité de France (EDF), the main French electricity provider, he analyzed the White certificates scheme from an economic perspective. At the Atomic Energy and Alternative Energies Commission (CEA), he developed new materials for electrical vehicles’ batteries.

In the early stages of his career, Dr. Ngaboyamahina created a recording label, the African Music Enhancement Records (AMER), dedicated to the promotion of urban African music.